BBC's "She Walks with Apes" to Debut on Earth Day

"We can't take a step outside and see what we are doing, just like orangutans can't.-- Dr. Birutė Galdikas, world-renowned orangutan expert ..... "The Trimates - three women who went to live among our closest relatives" sets the tone, the narration harkening decades back to when bravery and curiosity were more commonly deemed male traits. The term was coined by anthropologist Louis Leakey for three of the most famous champions of studying primates in their natural environments, Drs. Jane Goodall, Dian Fossey, and Birutė Galdikas. In 2020, lauding female scientists is more popular but not necessarily de rigueur. That's only one reason why "She Walks with Apes" is important.

Airing on Earth Day's 50th anniversary April 22, this compelling documentary narrated by Sandra Oh concerns three women who embarked on lifelong journeys to live amongst humankind's closest relative, the ape. The stories of Goodall, the late Fossey and Galdikas are beautifully complemented by tales of young female contemporaries literally following in their footsteps: respectively, Julia Badesku, Nadia Niyonizeye and Ruth Linsky. Goodall studied chimpanzees; Fossey studied gorillas in Africa; and Galdikas made history in Bornea with orangutans. Ape species include human beings, chimpanzees, gorillas, orangutans, gibbons, and bonobos and are much more closely aligned genetically to us than are monkeys. 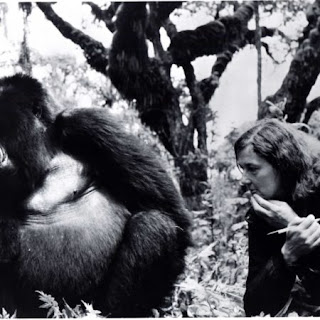 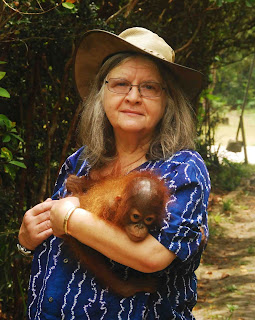 Galdikas began her love affair with the organatuns four decades ago. She followed Jane Goodall and her work with chimpanzees. Today Goodall is in her 80s but continues to lecture, tour and share her message of conservation and protecting apes. "In making ethical choices we can move toward a better world." Goodall, the film starts off by stating, left England to live with the chimpanzees. She began studying the Kasakela chimpanzee community in Gombe Stream National Park, Tanzania, in 1960 and oversees The Jane Goodall Institute. Her work is regularly cited and she remains the personification of the ape scientist in popular culture and imagination. "A wild chimpanzee mother allowed her infant to reach out with that wondering expression in his eyes to touch me," she shares in the weathered footage. The narrator then shares,"American Dian Fossey lived and died among the mountain gorillas of Africa." "Some days it was difficult to know who was the observer and who was the observed," a young Fossey states, smiling as she turns toward the camera. Later we discover how she died, so tragically, a story dramatized in "Gorillas in the Mist" starring Sigourney Weaver. These days, the young Niyonizeye works to illuminate and elucidate gorilla lovers who flock to Musanze, Rwanda to meet the beloved apes up close. Galdikas is a Lithuanian-Canadian primatologist, conservationist, author and orangutan expert and champion. These dazzling orange creatures punctuate the end of the film, and as the camera hones in on her outside her rustic hut in Indonesian Borneo she says: "We can learn a great deal from the orangutan just as we can from each and every animal on this planet. But I think the main lesson for me is to begin to understand how oblivious we are. Humans are really oblivious, just like orangutans are oblivious. Orangutans are oblivious to the fact that they are on the verge of extinction. It doesn't change their behavior very much." 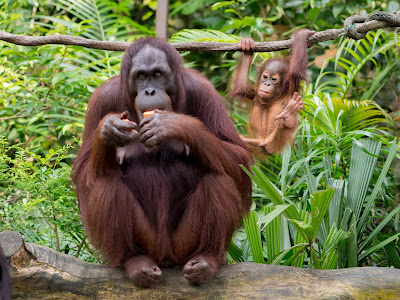 She established Camp Leakey in Tanjung Puting National Park in the early 1970s, home of scientific research and a refuge for orangutans, and is president of Orangutan Foundation International. Our orangutan relatives are like us; humans can't look beyond ourselves, either, Galdikas points out. "We can't take a step outside and see what we are doing, just like orangutans can't. It's hard to say how many orangutans are left. 80% of the rainforest has been badly disturbed or degraded, so I would say that probably 80% of the wild orangutan population has also disappeared. The populations that numbered 15,000 or 20,000; the wild populations that propel evolution are going to be gone." There is hope for mankind, but she sighs, deflated. "How is it that the most intellectual creature that's ever walked the planet is destroying its only home?" Throughout this gripping documentary, the viewer follows not only the trimates but the young ladies who have shaped their careers to honor them. Particularly compelling is Fossey's protege, young Niyonizeye in Rwanda, who of course never met her but has revered the scientist's legacy by continuing to climb a steep mountain to track the movements of gorilla families. Following her perambulation through a bamboo forest is not only fascinating but educational. The film nicely marries cinematic elements with learning opportunities. We find out which apes are vegetarians versus carnivores and what their mating habits are; how the researchers can better observe them; and why grooming is so important to them, and in turn why our mothers also groomed us. The film airs April 22 on BBC; check your local listings for BBC America channels. PHOTOS: Top: By U.S. Department of State from United States - Deputy Secretary Higginbottom Poses for a Photo With Dr. Jane Goodall and the State Department's Global Health Diplomacy Director Jordan in Washington, Public Domain, https://commons.wikimedia.org/w/index.php?curid=44603290; Second: By Ibuprofenunlocked - Own work, CC BY-SA 4.0, https://commons.wikimedia.org/w/index.php?curid=87408048; Middle: By Simon Fraser University - University Communications - https://www.flickr.com/photos/sfupamr/5577180639/, CC BY 2.0, https://commons.wikimedia.org/w/index.php?curid=44793593; Bottom: By Brett Jordan - https://www.pexels.com/photo/ape-baby-ape-orangutan-zoo-825595/, CC0, https://commons.wikimedia.org/w/index.php?curid=77597468;
Labels: Africa animals Apes BBC Birutė Galdikas Bornea conservation Dian Fossey females Gorillas humanity Indonesia Jane Goodall mentors Orangutans Rwanda