On Earth Day there's no better time to watch a gripping documentary called "Tomorrow". It shines a light on how both overconsumption and overpopulation have dovetailed at a time when climate change is threatening the planet. The film, first released in France at the end of 2015, stars French actress Mélanie Laurent ("Inglorious Basterds") and Paris-based activist Cyril Dion, whose message highlights a need to make the planet more livable not only now, but yes, tomorrow. Dion, who's also a director, co-wrote the film with Laurent. "Tomorrow" has won awards abroad, including France's equivalent of the Oscar, the Cesar, in 2016. Laurent as narrator explains how worried she is about her children's future following the 2012 publication of a Nature study from 20 researchers who show just how threatened planet Earth including we humans are. Stanford and U.C. Berkeley-based paleoecologist Anthony Barnosky, one of the lead researchers, speaks into the camera and says: “What we don’t realize is the changes we’re seeing take place on the planet today are occurring much faster and more dramatically than they ever have. We are actually causing plants and animals to go extinct faster than at any time since an asteroid hit the earth and wiped out the dinosaurs." 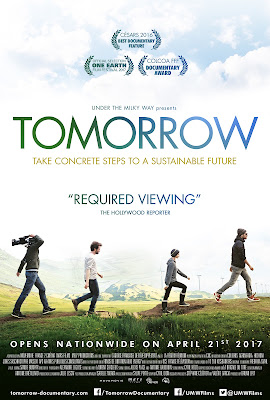 Viewers are treated to the worldwide travels of Dion, Laurent, and their crew - from Detroit and its community gardens to England's permaculture farms to a decentralized democracy model in Kuthambakkam, India. Where some films, such as Al Gore's "An Inconvenient Truth", mainly address the urgency of climate change, documentaries like "Tomorrow" are offering real-life solutions - such as in the small Indian village where, as poor residents are empowered, green building practices are applied and decisions are truly made democratically. Some of those solutions concern local farming and sourcing, and tapping local talent and urban landscapes to reinvent them in a sustainable way. The film is less effective, I think, when it talks about finance, a subject that is clearly interwoven with the dire message of the Nature study but which is less tangible than seeing someone grow their own tomatoes. Filmmakers travelled to 10 countries to visit permaculture farms, urban agriculture projects and community-owned renewable initiatives, and they nicely punctuate the differences everyday individuals, scientists, and professionals of every stripe are making - from food sourcing to alternative energy to education. "Tomorrow" opened theatrically in San Francisco April 14, followed by New York, Los Angeles and other markets over the past couple of days to coincide with Earth Day celebrations. PHOTO: Used with permission from Under the Milky Way. Watch the trailer to the film here. It is produced by digital distributor, Under the Milky Way.The next screenings here in the Northeast will be at Ramapo College of New Jersey on Apr. 29, and Societe Generale in Manhattan May 3. Writer's note: An earlier version of this blog referred to Dr. Barnosky as a paleontologist.
Labels: "Tomorrow" climate change Cyril Dion documentaries Earth Day green filmmaking Mélanie Laurent Nature