In its first-ever endorsement, the eight-year-old U.S. Green Chamber of Commerce promotes Hillary Clinton. According to the Chamber's president Michelle Thatcher, the choice was clear even if it wasn't always easy. After all, representing businesses means representing people of various political orientations. "First and foremost, it was a hard decision because we are such a varied membership, so the biggest implication of course we want to make is to have an effect. The numbers are still so close – this is why we put this out there. We put the country even ahead of our own non-profits," says Thatcher. She says that while endorsing Clinton "wasn't on the forefront" of the Chamber's planning, it made sense from a sustainable business perspective, as well as buinesses and practices they promote. "To do otherwise would be extremely risky," she says. The Chamber's endorsement follows the lead of hundreds of nationally prominent organizations - from newspapers like the New York Times and Boston Globe to Oprah to over 50 Republican representatives and senators. House Speaker Paul Ryan took a long time to endorse Trump, ultimately refusing to campaign for him and saying he "refuses to defend" him. Thatcher, who is based in Florida, points out how Republicans in power can really hurt the environment with their climate denial policies. She worked with the Association of Florida Conservation Districts, representing over 300 elected officials in the area of soil and water conservation. She's seen the detrimental effects of climate change deniers in office. She says, "A strong example [of an official hurting the environment with his policies] is Rick Scott in Florida. With Scott’s appointments and reduction or obliteration of environmental agencies, the public and environment are no longer protected." She says that from water to air to the handling of hazardous waste "there is no longer protection in Florida." She punctuates her point by stating that Scott "has banned all state employees from using the terms 'climate change' or 'global warming' in any government communications, e-mails or reports." Thatcher says, "Our primary role and mission [at the U.S. Green Chamber of Commerce] is to protect and promote America’s emerging economy – including education, networking, promoting good practices and advocacy." With the election coming up in less than two weeks, voters have a clear choice. Donald Trump has called climate change a hoax and wants to abandon the Environmental Protection Agency. And for people like Thatcher, Trump represents the antithesis of values Americans should care about promoting. "From an energy perspective Secretary Clinton's policies and platforms are much more in alignment [with our values at USGCC] certainly than Mr. Trump’s are," says Thatcher. "But also, the U.S. Green Chamber of Commerce cares about how one interacts on a social level within communities. How do we treat employees? Do we value our employees?" Governor Rick Scott's office was contacted by e-mail regarding commenting on Thatcher's remarks, but as of press time, they didn't respond. - lw - Voting occurs nationwide Nov. 8, 2016 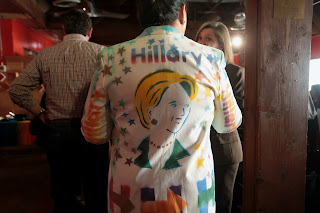