Six Earth-friendly alternatives to your auto

Connecticut consistently ranks as one of the nation's most educated states. From Yalies to proud UConn alums, we've an embarrassment of intellectuals here. So why is the state so dumb when it comes to tapping public transportation? Although Hartford ranks pretty decently -- in 2010 an estimated 21.1 percent of its residents regularly chose public transportation -- the state pales overall. On the same annual ranking, a city that has no excuse not to be on the bus or the train, a dismal 13.3 percent were onboard. In 2012, the U.S. Department of Transportation reported that over 78 percent of our residents drive alone in their cars to work. This examiner wholly believes that the greatest impediment to getting more folks to share a ride, or get on the bus or train is reversing a stigma. Being a bus rider is even fodder for comic effect in movies. Women walking to the bus in the 'burbs sometimes get propositioned as ladies of the evening! It's the bus, people, not a meth deal. The reason to reverse the stigma is clear and urgent: we are on a collision course with climate change and the planet isn't winning. From coral bleaching to cities choking on air pollution, climate change -- a laughed off topic by Donald Trump -- is the plague that keeps on giving. Thought last summer was too warm? Just wait till the next hurricane hits us and everyone's remarking how severe the weather "suddenly" is. So here are some options for putting your car keys on the dresser and finding another way to work, school, the mall or anywhere! • Take the train: • Metro North runs New Haven and Harlem lines with connections to many points east and north. Take Amtrak from Hartford to connect in New Haven. • Get on the bike and ride!: • Bikes are not just a way to get to where you want to go in an eco-friendly way, but you'll burn calories, tone muscles and help your heart. Do check with your doctor first, though, if coming back from injury or illness, if you are out of shape, or if you're in your senior years. • Uber's super: • Download Uber's app and away you go. Millenials can't even imagine driving or taking a cab. Though the San Francisco-based company's had a few legal troubles, overall it's worth consumers' investment. • Walk, stroll, amble along: • What a sweet time of year it is here in Southeastern New England. Walk that mile to Whole Foods or the six blocks to Marianne's baby shower. Americans are too addicted to expensive germ-full gyms and not enough to old-fashioned walking. Make sure you're wearing decent shoes (shop only name brands and make sure to walk a lot in the store prior to purchase.) • Bullish on Buses: • This examiner takes Greyhound from San Antonio to her mother's small town a couple hours east. Sure, sometimes the AC is funky or the people behind me make too much noise, but it's cheap, reliable, and helps me offset my carbon footprint. You can take Greyhound right here, too, from Union Station. Meanwhile, travel crosstown on Connecticut Transit's dirt cheap city buses! And this year, the U.S. Department of Transportation rolled out the state's FastTrak to link buses from Hartford to various Northeast cities, and reduce wait times. • Carpool and make friends: • During the height of the recession, folks in San Francisco lined up to carpool. They had the right idea! One positive trend during the economic downturn was more people seeking to save gas money, and hence, the environment. Whatever it takes to climb onboard the ecotrain, do it. This article was first published on Examiner.com, under the writer's Hartford Green Living column. 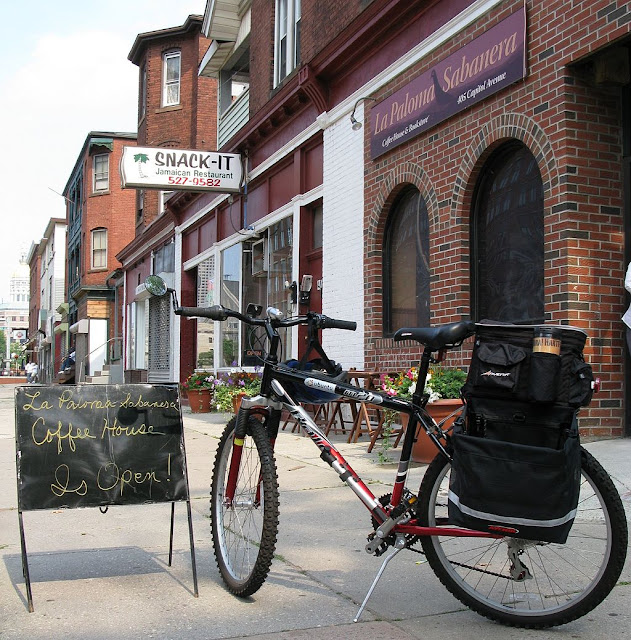