Vivint Solar just released a new report highlighting the states with the "naughtiest" and "nicest" relationship to coal, based on percentage of their energy that has historically come from burning it. "According to our analysis, while many states are moving away from coal, there is still a concerning number of states that get the vast majority of their energy from this dirty energy source," the company said in a statement. When coal is burned to create electricity, it emits carbon dioxide, sulfur dioxide, nitrogen oxide, and particulates that contribute to poor air quality and climate change. That's why Vivint has listed several states on its Naughty List and some on the Nice List. Where does Connecticut fit in? We're doing okay. Using data from The US Energy Information Association, the company compiled a report that highlights the percentage of coal each state used last year. They culled the total amount of electricity generated (megawatt hours) in each state and compared it to the total amount of coal that was reportedly used in each state. According to the EIA, coal industry employment has plummeted 42% since 2011. So not only are we nice in Connecticut, but we're nice to the environment. We come in number 6, though technically number 9 because the number 1 place is a three-way tie between Massachusetts, Rhode Island and Vermont. We get less than 9% of our energy from coal-based fuel. With many initiatives not only statewide but nationwide promoting wind, solar and other forms of alternative energy, everyone can strive to be on next year's "Nice List." 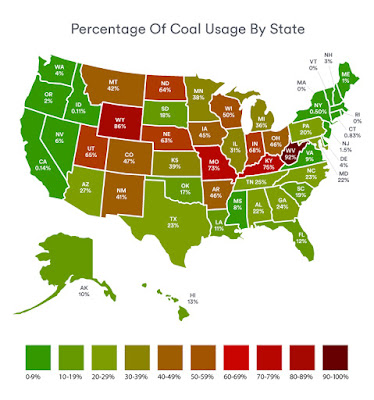