The American Society of Civil Engineers has issued their 2017 "Report Card" for the nation's infrastructure, and the news is not good. The last report, issued in 2013, gave America a D+ and we're still at the same grade. Connecticut is hardly excluded. The ASCE says of our state that our "deteriorating infrastructure" impedes our ability to compete globally, and writes, in part:

... Connecticut Green Living spoke with ASCE's past president, Andy Herrmann today regarding both the nation and about Connecticut. Following is an edited transcript of the call: CGL: Did the national report card grade surprise you? Why or why not? AH: No – it hasn’t surprised me because we really haven’t been putting any investment into our infrastructure. There is a lot of talking, but people don’t want to put dollars forward. Some states have raised their gas tax, and one can see some additional work being done in terms of roads and bridges. While the Federal Government has the FAST Act (Fixing America's Surface Transportation) in place -- this is the replacement for highway bills in the past – if it gets funded it’s really at or the same as funding in the past. FHWA (the Federal Highway Administration) projected that $20.85 billion per year would be spent on just bridges – and in reality it's 12.8 billion. In 1993 the federal gasoline tax was set at $18.4 cents a gallon [where it still is today], and some states have multiples of that. For example, New Jersey is the last state I can think of that has raised its gas tax, but it was so recently that probably not much [infrastructure work] has been done. CGL: One of my interests is bridges. Have bridges become more of a concern in America, based on the report card grade? Why or why not? Is age still a concern? AH: They are still a concern, and age is one area, while they are starting to get the number of structurally deficient bridges down. Even so, the average bridge age in the U.S. is like 43 years old, and bridges of that vintage were designed for a 50-year lifespan. If you're not doing a lot of maintenance, you have a problem. I see this older generation of bridges approaching "social security" now and some are way past that point. The average lifespan of bridges designed back in the 50's and 60's was 50 years. And we have 614,387 bridges total in the country [including those to be concerned about]. CGL: If the overall grade is the same as it was four years ago, why should Americans have hope? AH: Well, during the election we heard both sides say they would invest in infrastructure, and the President wants to invest but he's talking more about private dollars coming into infrastructure, which would help, but there has to be a way to pay that back. For example, it could be a toll on bridges. CGL: How does President Trump feel about raising the fuel tax? AH: I don't know. He hasn't commented on the gas tax. Republicans seem to be totally against it. But see how much the price of gas is fluctuating. If you added a quarter to the tax, you could really take care of the highway trust fund. CGL: Andy, what are some of the infrastructure issues drivers in Connecticut and the Northeast generally need to worry about? AH: [For one thing], we have an older inventory of bridges. We have a lot of steel bridges, and in the Northeast in particular, we use a lot of salt to make roads passable. When combined with water, the mix can accelerate deterioration of steel and concrete. There should be [better] maintenance of bridges in the Northeast, even doing things like using a firehose to spray off debris so it doesn't just sit there, and cleaning out drains or the scupper on the side of the roadway. ### Photo: The Thames River Bridge, built in 1919 and renovated in 2008, lies between Groton and New London, Connecticut, and is emblematic of many older bridges in the U.S. 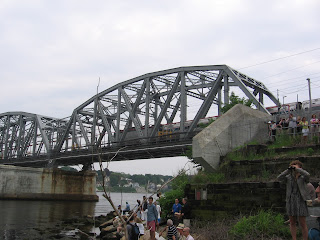