New eco-living book 'Sustainability Made Simple' lives up to name

What's refreshing about Sustainability Made Simple: Small Changes for Big Impact is that it doesn't talk down to the reader, nor does it assume the reader knows anything more than that the climate is changing and everyday citizens should do their part to slow the process. The young authors, fairly recent University of California San Diego International Affairs grads, met on campus when they were studying environmental policy. Laurèn DeMates now works in sustainability in San Francisco at a tech startup, and co-author Rosaly Byrd, who blogs on sustainability for the Huffington Post, was calling in from her role as a sustainability professional for the UN in Rio de Janeiro. DeMates told me recently that the idea for the book arose naturally. "We definitely knew we wanted to do something about the polarization about information on sustainability. There was nothing in the middle that was helpful to individuals who don’t necessarily call themselves environmentalists. We wanted to do something to appeal to a new set of environmentalists and inform the discussion." She adds that she and Byrd knew they could access material that can be somewhat tedious and "translate it to be consumed in an easier way." That material includes learning about how much water is used to make a simple cotton t-shirt, that toxins have been ubiquitous in clothing and makeup, that electronic waste is not being recycled responsibly enough, and that one should separate her fruits from her veggies. (Who knew that fruit emits ethylene gas "that will make other produce get ripe and go bad faster, leading to increased food waste," according to the authors?) The book reads very fluidly and touts some cool graphics, such as images of various animal foods and how much their consumption contributes to climate change. For example, most of us didn't know that producing 2.2 pounds of beef emits the same amount of greenhouse gases (GHGs) as does driving 64 miles in a passenger car. A big part of the reason has to do with clearing land for the animals' grazing, but the other part is cattle are emitting gases. 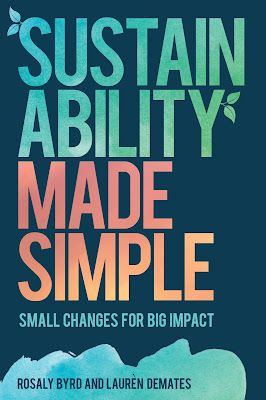 That begs the question, is the book right when it talks about burps? What about, uh, cow farts? DeMates laughs: "No, it is burps. That's what the science says." She stresses, though, that even though Byrd doesn't eat meat neither of them is telling people they must become vegans or vegetarians. Rather, try a Meatless Monday model and make a dent in curbing your carbon footprint. But giving up meat one day a week is just a tip of the melting iceberg, and DeMates is quick to point out that a big part of the problem is the system itself. For example, the book discusses how choosing to buy items in bulk, such as granola or nuts, and bagging them ourselves help cut our CO2 dump on the planet. “I don’t think the average person thinks about it [sustainability] and it’s not necessarily their fault [when they make bad choices] – the system just makes it easier to be unsustainable and do things that are harmful," says DeMates. The book, published by Rowman & Littlefield and released Mar. 16, is available on Amazon and soon at Barnes and Noble online and in stores. Artwork: Used with permission from MM Publicity.
Labels: carbon footprint climate change CO2 GHGs green living greenhouse gases LEED meat eaters sustainability