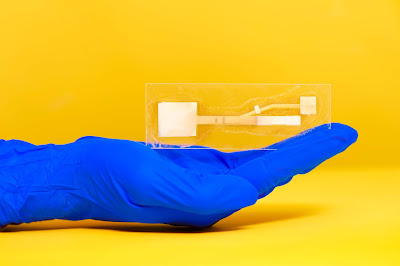 Yesterday, the Department of Health and Social Care in the UK reported that they have administered 13,911 tests for Coronavirus, formally called Covid-19, of which 13,860 were negative and 51 positive. Journalist Chris Hayes of MSNBC retweeted this and pointed out that "For context this is 26 times the number of tests the US has run, as of the last publicly available info. But CDC isn’t making this data available." Scientists and their research are the best in the world right here in the States, but whether the tests are being rolled out quickly enough does remain to be seen. Researchers at Purdue, though, have come up with a possible test they would like to see move forward, though. Only a select number of state and local laboratories have permission from U.S. health officials to use diagnostic tests for COVID-19. If the virus is spreading nationwide, most communities do not have access to the necessary tests. Purdue University biomedical engineers have developed a handheld paper device that they claim "quickly and accurately detects a different strain of coronavirus, MERS-CoV, even in really small quantities. A clear test result can be read directly from the device itself, making it portable." Because the device isn’t specific to any virus, the same platform could be used to detect the COVID-19 strain, say the researchers. But developing a process to manufacture it would cost at least a couple of million dollars. A research paper on the device was recently published in the journal ACS Omega. “Paper-based devices are already manufactured – pregnancy tests are paper-based. Because this device has a more complex shape, a process hasn’t been developed to make it available on a commercial scale. However, many processes in electronics and paper manufacturing could be translated to scaling up this device,” said Jacqueline Linnes, Purdue’s Marta E. Gross Assistant Professor of Biomedical Engineering.

This time-lapse video shows how a paper device developed by Purdue researchers tests a sample in 40 minutes. This sample is positive for MERS-CoV, as indicated by the formation of a second line on the paper strip. (Purdue University video/K Byers) Linnes specializes in building portable diagnostic tools that detect infectious diseases. Her lab’s devices are constructed of robust paper-like materials, such as glass fiber and cellulose, that have been shown to detect HIV and cholera. To know if a sample is positive, a user just looks for a second line to appear next to a control line on the device’s paper strip – similar to reading a pregnancy test. But so far, Linnes’ team has just been able to produce these devices on a lab scale, which calls for cutting out the paper components by hand. “The most difficult aspect of producing this device is definitely the assembly,” said K Byers, a Ph.D. candidate in biomedical engineering at Purdue. These challenges may easily be overcome with existing manufacturing techniques, the researchers said. The paper device could be produced using the same roll-to-roll manufacturing tools that make pregnancy tests and a “pick-n-place” process, already used in electronics manufacture. The format wouldn’t need to change in order to detect other diseases. As the device scales up, however, it would also need to be more sensitive to detect a lower concentration of a virus for clinical relevance, say Purdue researchers. “This paper device isn’t dependent on a particular virus or sequence. To detect COVID-19, we would just need an assay design specific to that sequence, which could come from a nasal or throat swap sample. Just like with MERS-CoV, a user could load the assay with liquid into the paper platform, fold the device and let it run,” Linnes said. Folding the device automatically completes a multistep process needed for detecting a virus. When the device folds over, a liquid wash and reagents push the assay up a paper strip to create a detection line. A user can check the strip within 40 minutes to see if the sample tested positive. Because the reagents are already dried onto the device, a hospital worker who might need to test someone outside of a facility wouldn’t have to carry around reagent vials. The worker would simply need a couple of test tubes to prepare the assay. A patent application has been filed for this technology. Linnes’ team collaborated with CrossLife Technologies to design the assay for MERS-CoV. Read more about Linnes’ work at https://purdue.university/2VDaABv. Blog created from article by writer Kayla Wiles, wiles5@purdue.edu
Labels: Coronavirus Covid-19 Pandemics Purdue University science scientific research United Kingdom United States