Wear your mask, but not at the expense of social distancing 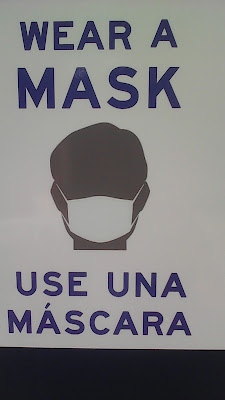 For good reason, I have feared going out into the world over the past three and a half months. Yesterday I took three bus rides and on the second, I could have had my life put in jeopardy. I will only know if I come down with COVID-19 symptoms or get tested to find out. Here is what happened: I was on the Coastal Link bus here in Connecticut, gazing out the window, when an unstable and quite vocal disheveled character wandered aboard in front of Stop 'n Shop. He sat down and then got up and started to sing (badly) out the window. This immediately rattled me so I mentioned it to the driver, who called out but then ignored him. As I gazed out the window trying to calm my nerves, I suddenly heard something and turned to my left. He was at my side, crazed One-Flew-Over-The-Cuckoo's-Nest-like, cackling and writhing just inches from where my nostrils could absorb someone's viral droplets. "AAAAHHHH!!!! GET AWAY! GET AWAY FROM ME!" I shrieked. He toppled backward, as if the sheer strength of my voice had felled him. The driver now suddenly seemed to care very much. "Hey, hey you! Get back there. Do you want to ride! Then get back there!" This individual - maybe drunk, maybe drugged, maybe mentally challenged or all three - wriggled backward. My heart pumping, I wondered if I should get off. But I needed to get to where I was going. Did I have a mask on? Yes. A surgical mask. Did that protect me? Maybe. But maybe not. The N-95 isn't even 100% foolproof; hence the name "95" which stands for its 95% effectiveness (sometimes they are more effective). This is why I say: there is no replacement for staying home. There is no replacement for keeping your distance. During those bus rides yesterday I observed all manner of folks in masks acting as if they were therefore immune from contracting COVID-19. One gentleman was loud talking to the bus driver (now that the front of buses is blocked off it's impossible to get right up to the driver to speak with him). I wanted very much to tell him that research has shown how loud talking can make the droplets spew farther, but I did not want to risk his wrath or have him turn his droplets toward me. The average bus rider has no idea that the surgical mask may protect him at about a 50% rate; the cloth masks probably less. If one breathes in droplets from the sides of a surgical mask, the risk is greater. So yes, wear your mask, but don't let it mask the need to avoid your fellow viral transmitters. We have become weapons out in the world. Act accordingly. The governor has ordered that a mask or cloth covering be worn on all state buses here in Connecticut. PHOTOS by Laurie Wiegler; second image on Connecticut state bus.
Labels: buses Covid-19 health Masks Pandemic Precautions public transportation Safety Social distancing