Eighty-five cities worldwide have been analyzed by Nestpick for how they will experience climate change in the coming decades. The company specializes in international apartment rentals so it's very smart of them to "keep a close eye on trends and developments in the most popular cities around the world," adding that "how climate change will shape our planet both in the coming years and the distant future is at the forefront of many of our minds." In America, Nestpick analyzed Boston, Chicago, New Orleans, New York, Baltimore, Seattle, Jacksonville, Cincinatti, Washington D.C., Nashville, San Francisco, Atlanta, Miami, Denver, San Diego, Los Angeles, Houston, Las Vegas Philadelphia, and Orlando. Of these cities, the highest temperature rise by 2050 will occur in Philly, at an estimate of 5.78 degrees Fahrenheit. But other cities are set to spike including Chitown at 5.60 degrees and New York at 5.31. Nestpick tapped excellent sources to conduct their research including Jean-Francois Bastin, ecologist at the University of Ghent, the Koppen-Geiger climate classification system and the World Resources Institute data on water shortages. In their release they state, "We then put together a list of 85 cities which were covered in these existing studies. Looking at climate categorisation, average temperature, sea-level changes and water stress, we then determined which cities are predicted to experience the highest and lowest climate change shift between now and 2050." 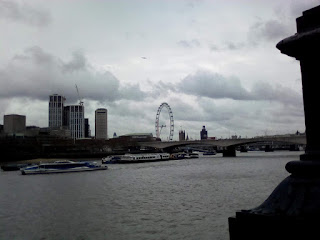 Across the Pond, expect London to rise from about an average 52.03 degrees Fahrenheit now to an estimated 55.76 degrees by 2050, and Oslo to spike 4.05 degrees while altogether having its climate type (season norms) altered, from Continental, Warm, Humid, Summer in 2021 to Temperate, Humid, Cold, Summer in 2051. Analyses also included differentiation by income groups and expected 30-year sea level rise. Bangkok ranked highest on the list worldwide, at a 100 rating; in the States, the much-talked-about New Orleans also ranked relatively highly at just over 37. For the full list read more here. Top Photo: By the late Mary Kathleen Leonard, of the Cliff House, San Francisco; Second photo: by the author, London
Labels: climate change global warming sea level rise temperature rise