Paraben-free deoderant is a sweet idea

I am not a scientist or even an expert on the effects of preservatives called parabens on the human body, but increasingly I have become worried about all the deoderant I use. My late mother rarely broke a sweat, but I did not inherit that gene. Perhaps due to a slight thyroid disorder (still indeterminate) coupled with being slightly overweight, I have a harder time staying as sweet-smelling as a lady should. 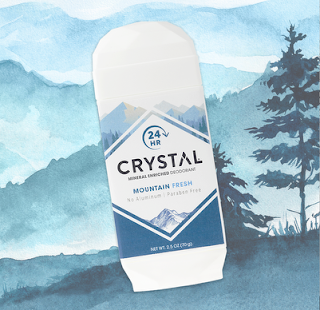 That said, I have resisted so-called 'natural' deoderants. I tried one from Whole Foods, maybe it was Tom's (a perfectly good brand), but it did not do the trick. I jumped ship and returned to my Suave roll-ons. In London, where I attended grad school, I became addicted to the spray version of Suave (I do not think it's as dangerous as the old-school aerosol varieties). However, as a green living writer I began to realize I was a hypocrite, and I did not like how this smelled one bit. Problem solved, more or less: CRYSTAL Mineral Deodorants are paraben-free and come in a variety of types, from a roll-on to a stick, including Mineral Deodorant Stick and Stone (both water activated) in smells such as lavender and white tea and vanilla jasmine. Also, there is virtually no residue. Admittedly, if one is inclined to sweat a lot (as I am) there is virtually no panacea for what ails. Yet, wearing CRYSTAL does make me feel that I have a fighting chance of smelling fine through the course of the day while not upsetting my hormonal balance, irritating my skin or promoting breast cancer risk (Note: I am not an expert. I am not a scientist. Please research deoderants and parabens if you are worried.) The deoderants sent to me do effect a sticky feel, I find, but this is offset by slightly dabbing the armpit after application. The deoderants, it should be noted, are not anti-perspirants but are just designed to prevent odor. One will continue to sweat. 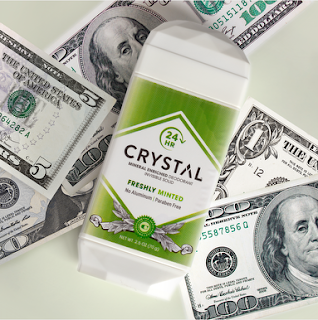