When I lived with my mother in Texas, she worried about the way I would reuse my straws. "I'm not sure it's sanitary," she said. I told her there was a big movement to curtail plastic use and reuse straws. I had been sent a metal straw a couple years earlier. Mom didn't use straws, but she immediately understood. 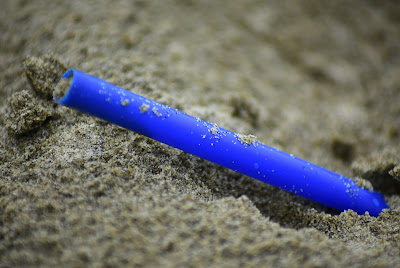 I was happy to see that there is a nationwide university movement toward this end. Longwood University in Farmville, Virginia has announced that students there recently became "champions" in the nationwide Pledge Against Plastic Straws Campus Challenge 2019. The contest was organized by California-based Simply Straws, which sells reusable straws and encourages college campuses to shutter plastic straw use. Longwood collected 878 pledges from students, staff and the community to “Kick the Straw” habit, putting the university ahead of 71 other institutions. Indiana State came in second place. All one has to do to understand the ills of plastic use is look at a recent BBC video of a journey down to the bottom of the Mariana Trench. I was struck by the image of a single plastic bag (!!) at the very bottom. Think about it. In addition to cluttering our highways and trees and sidewalks, more gravely, plastic filters into our waterways and becomes ingested by fish and other creatures. It is not just a tangential problem, either. According to the World Wildlife Fund for Nature website, "One dump truck full of plastic waste enters our ocean every minute. That’s 8 million tons of plastic every year impacting marine wildlife and people." While the 'Kick the Straw' campaign, which uses social marketing to solicit pledges, was specifically designed to clean Virginia waterways, similar programs are popping up nationwide and internationally. A new campaign sponsored by the UN revealed that 187 companies have committed to No Plastic in Nature by 2030. According to the WWF website,"Unless we repair our fundamentally broken global system of plastic production, consumption and waste management, it’s projected that by 2050, the total amount of plastic waste in the oceans will weigh more than all fish, and 99% of seabirds will have ingested plastics." Photo: By Ocean Blue Project A Oregon Nonprofit - Own work, CC BY-SA 4.0, https://commons.wikimedia.org/w/index.php?curid=76074352
Labels: fish Longwood University Mariana Trench metal straws plastic plastic straws plastics reusable straws straws universities